Cristiano Ronaldo is probably one of the best football players of all time and much of his success can be attributed to his athletic ability, which has often been described as “superhuman”.

Growing up a fast-footed winger, speed and agility have always been Cristiano Ronaldo’s strong points, but his transformation into a striker later in his professional career saw the Portuguese phenom add two more weapons to his arsenal – physicality and an astonishing jumping ability.

During his formative years at Sporting Lisbon and his first few years at Manchester United, Cristiano Ronaldo’s aerial prowess was mediocre at best.

However, after hours of honing his skills on the training ground and gym every day, Cristiano Ronaldo has gradually become a force to be reckoned with in the air. This quality started to emerge in the later stages of his first stint at Old Trafford but only really shone after his move to Real Madrid in 2009.

Summarizing Cristiano’s authority in the air, as many as 112 of the 700 goals of the Portuguese superstar in his club career were head shots. No other player in history has scored more header goals than Ronaldo. That number is approaching 150 if his international targets are taken into account.

Some of Cristiano Ronaldo’s header goals were so astounding that his ability to jump high and stay in the air has been compared by fans to NBA greats like Michael Jordan.

In fact, Cristiano Ronaldo’s jumps do not quite match the jumps of Jordan, who is nicknamed His Airiness because of his astounding aerial skills on the basketball court. However, the Portuguese footballer’s prowess in the air can surpass the average NBA player.

Cristiano Ronaldo’s highest jump is 2.93 metersrecorded against Manchester United while playing for Real Madrid in the first leg of the 2012–13 UEFA Champions League round of 16.

Considering Ronaldo’s height stands at 6’2″ or 1.87 m, his vertical jump on goal can be measured at approximately 1.06 m or 41.7 inches. Jordan’s highest vertical jump, an NBA record, measures 48 inches. The average vertical jump of NBA players is about 28 to 30 inches.

Real Madrid’s match against Manchester United in the round of 16 of the 2012 UEFA Champions League was a special occasion for Ronaldo. After sealing a major move to Madrid from Manchester in 2009, it will be the first time the Portuguese star faces his former team and mentor, Sir Alex Ferguson.

In the first leg at the Santiago Bernabeu, Danny Welback put United ahead in the 20th minute, but Ronaldo’s 30th-minute header helped Madrid draw 1-1 at home. At the time the ball headed Red Devils goalkeeper David de Gea to equalise, Ronaldo’s head was 2.93m off the ground, making it his highest jump.

After a 1-1 draw at the Bernabeu, Real eliminated United after beating them 2-1 at Old Trafford in the second leg. Ronaldo scored the winning goal in the match.

The second highest jump recorded by Cristiano Ronaldo was a jump of 2.56 m recorded while playing for the Italian club Juventus. A violent header after the first half turned out to be the winning goal against Sampdoria in the 2019-20 Serie A season.

After Paulo Dybala gave the Old Lady the lead in the 19th minute, Gianluca Caprari equalized for Sampdoria in the 35th minute. Ronaldo, however, silenced the home fans at the Luigi Ferraris Stadium with an astonishing header from Alex Sandro’s cross just before half-time.

The most notable aspect of the goal was that Cristiano Ronaldo, then 36 years old, remained suspended in the air for almost 1.5 seconds before heading into the goal that ultimately proved to be the winner.

A year before his gravity-defying jump against Sampdoria, Cristiano Ronaldo recorded another incredible jump, a jump of 2.47m, while playing in the 2018-19 Serie A against Torino.

Torino’s Sasa Lukic gave the visiting team a shocking 17th-minute lead as the Bulls looked poised for a famous home victory over Juventus. Cristiano Ronaldo, however, had other ideas and deprived Torino of the victory by equalizing in the 84th minute with a header that nearly blew off the roof of a packed Juventus stadium.

In 2011, Cristiano Ronaldo scored a hat-trick and led Real Madrid to a 7-1 victory over Osasuna at the Bernabeu in the 2011-12 La Liga season.

Two of the three goals he scored in that match came from heads, an astonishing jump of 2.44m to complete his hat-trick against the unlucky Osasuna side.

Helping Portugal win the Euro 2016 trophy remains Cristiano Ronaldo’s biggest international achievement to date, with the striker’s three goals and as many assists playing a huge part in the historic run.

Possibly Ronaldo’s most important goal of the tournament was the opener in the semi-final against Wales, a team that had beaten the pre-tournament favorites Belgium in the quarter-finals.

Ronaldo’s astonishing jump and header in the 50th minute after a goalless first half paved the way for Portugal to win 2-0 in the decisive game. 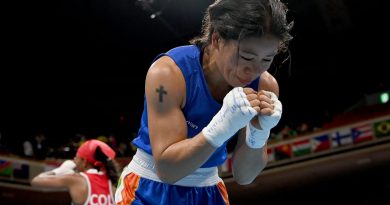 Virtual GAISF General Assembly 2022: Learn how to tune in live